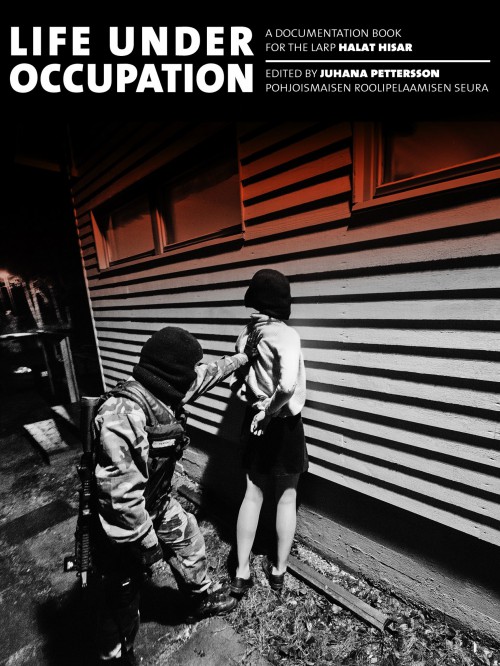 Halat hisar was a Palestinian-Finnish larp production played in Finland in 2013. It was produced by Pohjoismaisen roolipelaamisen seura, and its aim was to recreate the political conditions of occupied Palestine in a Finnish context: in the alternate reality world, Finland had been occupied, and the game was about people trying to live their daily lives under military rule.

Life Under Occupation is a documentation book about the project, featuring photos, visual materials and articles about the game. There’s a multitude of views, from the organizers to the participants, Finns and Palestinians, writing about the various facets of the larp.

Subjects include the history of occupied Finland, what’s it like to play an interrogator, being a foreign activist, and how does it feel to leave such a game after it’s over. Many of the photos, including the one on the cover, are by one of the world’s best larp photographers, Tuomas Puikkonen.

A documentation book about the larp Halat hisar

A collection of articles.

Published with the support of Ropecon