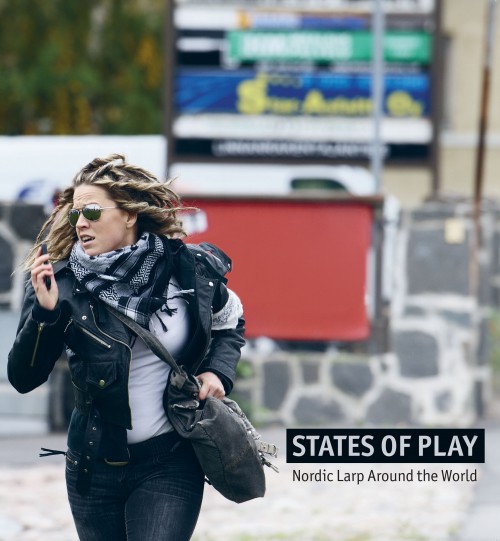 (The cover of the Solmukohta edition of States of Play.)

The annual Solmukohta roleplaying conference is the epicenter of the Nordic Larp design movement. The conference rotates between Denmark, Finland, Norway and Sweden, and every year there’s a book collecting articles pushing the envelope of what roleplaying and larp can be.

States of Play: Nordic Larp Around the World is that book for the 2012 Solmukohta, held in Finland.

The book is published for free on the net, and as three different physical editions: the Solmukohta edition, distributed to every Solmukohta 2012 attendant, the commercial edition, for sale after the event, and the author’s edition, for those who wrote articles to the book. Each version features a different cover.

You can download the book here as a free PDF.

Nordic Larp Around the World

A collection of articles.

High on Hell by Elin Nilsen

Why do we go to games where the emotional content is overwhelmingly negative?

Valve is a Helsinki-based city game where dream is the only reality.

The Joy of Kidnapping by Juhana Pettersson

It’s hard to find venues for experiencing the joy of kidnapping in modern society.

The Golden Rule of Larp by Simo Järvelä

Larp ethics are still in their infancy.

A Moment of Weakness by Yaraslau Kot

Sometimes the opinion of one person is enough to get a game cancelled.

Dublin2 brought the reality of EU’s asylum policies into the center of Helsinki.

Some lessons from the discussion concerning the game Just a Little Lovin’ in Swedish media.

The larp Kirjokansi escapes the shadow of Tolkien.

Using the toolbox of Nordic Larp to create and reinforce national identity.

Who decides if a larp is a success? The organizers, or in the case of the game Valokaari, the players?

Sometimes Hell is other people in your office.

The book is a game, as we always suspected.

The Labyrinth of Possibilities by Gabriel Widing

How to make a game of living in reality.

We Created a Monster, Part I by Johanna MacDonald

The origins and further permutations of the Walkabout project.

We Created a Monster, Part II by Aarni Korpela

As we all know, singing is the most important part of any debrief session.

Shadowrun by Thomas B.

Give Me Your Hands, I Will Be Your Eyes by Aaron Vanek

The experimental game Steeds, and how it worked in practice.

Mistakes I’ve Made by Claus Raasted

Claus has made many mistakes.

The Rogue Wave by Andrea Castellani

How to see larp as a topical wave instead of a narrative.

It’s About Time by Eleanor Saitta

Time and how it was constructed in the larp Just a Little Lovin’.

More conceptual tools for larp design from the designer who brought you Ars Amandi.

Tears and Defeat by Nathan Hook

You can’t win against faeries or superficial Swedes.

What is Good Playing? by Niina Niskanen

The Evaluation of Elusiveness by Aleksandra Mochocka

A report from the Polish Golden Axes roleplaying competition.

This larp has it all: Luchadores, freedom fighters and the best special moves of any game, ever.

A report on the Finnish larp campaign Tahtotila, about an insane asylum detaching from reality.

Your Character is Not Your Own by Gustav Nilsson

The Blessing of Lineage by Lauri Lukka

Why play “single-generation” games when you can play a dynasty?

We Hold These Rules to Be Self-Evident by Lizzie Stark

D&D is the American Dream.