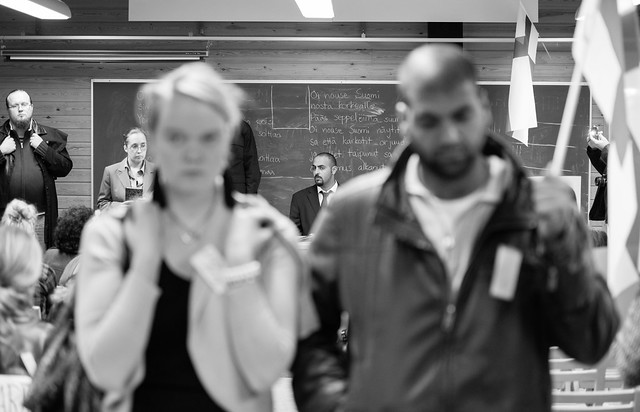 It is a usual day at the University of Helsinki. Some of the staff and students are busy organizing a controversial conference that others are opposed to. The elections for the Chair of the Student Council are to be held tomorrow, and the candidates are campaigning. All this will be interrupted when soldiers arrive to campus, but under occupation this, too, is part of your normal life.

Most of the characters are students. Some of them are active in politics, and six of them are running for the Chair of the Student Council (the elections are held during the game and all students have a vote). There will be an elections debate during the game (see here for more info on the political parties).

There are two candidates from Social Democratic Liberation Party (one of them more radical and the other more prone to compromises), two from Party of Christ (one of them a future priest, the other one more interested in violent resistance than religion), one from Socialist Resistance Front (a charismatic idealist with a vision) and one from Pan-Nordic Liberation Front (a social climber with some dubious connections).

Many of the other students are involved in the campaign of one of the candidates and try to persuade others to vote for them. Some of the students are active in non-violent resistance against the occupation and others are members of armed groups. There are also those who’d just prefer to lead a normal life and to concentrate on their studies. Students belong to various groups such as political parties and hobby circles like the Writer’s Club or the Folk Dance Group.

There are six members of the university staff present – Dean of Humanities, three professors – in linguistics, Tolkien Studies (a cherished field in the Occupied Finnish Territories!) and media studies, and two researchers. In addition, there is a visiting professor that has arrived for the conference. Most of students and staff are Finnish, but some of these characters are available to foreign players as well, there are exchange students at the university and a couple of foreign professors. There are also journalists who report on the conference, the student elections and the occupation, human rights activists who are there to monitor human rights violations, and a couple of foreign fighters who have come to help the Finnish cause. Some of the activists and journalists are Finnish, and all characters have close contacts with locals.

There is a controversy about the Great Literature and Humanities Conference Helsinki 2016 that will start tomorrow. The Jordanian Minister of Culture, Shafeeq Ahmad A-Najati, who supports the occupation of the Finnish Territories, will attend the Conference. However, the Minister is a great patron of literature and arts, and he has promised to donate large funds to the Faculty of Humanities. These are much needed, since the faculty is striving with economic problems, and many departments are under the threat of being closed down due to lack of money. Opinions are divided on whether he should be allowed on the campus or not. To make matters worse, Minister Al-Najati has characterized the works of the British author J.R.R. Tolkien, beloved by the academic Finns, as “superficial fantasy kitsch”.

These statements have made many Finns angry. There is turmoil at the university, and it is discussed whether a guest like Minister Al-Najati should be allowed to the conference. It is expected that students will stage protests and pressure the conference participants to boycott the event. The fact that elections for the Chair of the Student Council will be held tomorrow makes things even more heated, as the candidates are trying to use the situation to boost their election campaigns.