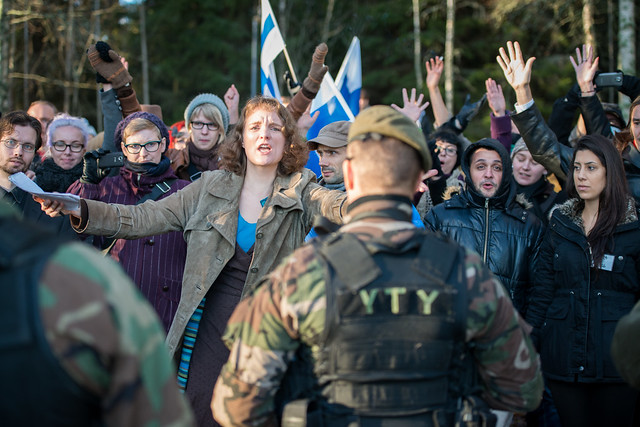 A History of Finland

Since ancient times, a shamanistic religion known as Ugricism has been practised in various European countries. Its followers are called Ugrics. During the Middle Ages, many Ugrics were burnt as witches for their shamanistic rituals. Many of them had to hide their religion and practice in secret, and some converted to Christianity. The discrimination continued for a long time. During some time periods and in some countries, the Ugric people lived in their own segregated areas, and they were widely considered to be intrinsically different from normal Christian people.

Towards the end of the 1800’s, when nationalist ideology was flourishing in Europe, the idea was born that Ugrics were not just a religious group, but a nation. A Ugric nationalist movement called Uralism was born. This movement saw certain parts of Russia, especially the area of Grand Duchy of Finland, as their historical homeland. The Uralist movement started a mass migration to Finland, with the objective to eventually found a Ugric state there. Ugrics coming from various countries spoke different languages, but as a part of the project, the Proto-Uralic language (kantaurali in Finnish) was revived to be a common language for the envisioned state. For a long time, the Proto-Uralic language had been used only in Ugric religious rituals. The aims and actions of the Uralian movement caused conflict both with the Russian officials controlling the area and with the indigenous Finnish population.

The migration increased considerably before and during the Second World War, when Ugrics were persecuted in Nazi Germany much the same way the Roma were. Many Ugrics fought in the war on the Russian side against Germany. But when the war ended, Ugric fighters came into conflict with Russia, as they wanted the area of the former grand duchy of Finland for their independent homeland.

In the year 1949, the recently founded United Nations proposed dividing Finland into two independent states – a Ugric state and a Finnish state. In the partition plan, 56% of the land was allocated for the Ugric state. At that point, about one third of the inhabitants of the area were Ugric and they owned about 6% of the land. Moreover, a considerable number of Finns were living on the land area allocated for the Ugric state.

Among the Finns, the partition plan was considered unfair. When negotiations between the different parties were held, the Finnish representatives decided to boycott them. The partition plan failed, and the Uralians took the reins of history in their own hands, using the Finnish reaction as a justification. Incidents of violence on both sides escalated into a full-scale civil war.

The fighting happened mainly between the Ugrics and the Finns. The goal of the Uralist movement was to establish an independent Ugric state and the goal of the Finns was to prevent that. The Russian Red Army tried to stay away from the conflict and slowly retreated from Finland. As part of the establishment of a state with a Ugric majority, the Uralist forces forcibly transferred Finns from the areas under their control, and razed hundreds of villages and towns to the ground. Many Finnish historical monuments – such as the impressive Turku Castle – were destroyed.

In July 1950, the Soviet Union announced that its troops had officially withdrawn from the area of the grand duchy of Finland and would no longer take part in the conflict. The Uralist movement then declared the independence of the Ugric state of Uralia in Turku. A right to citizenship for all people of Ugric religion, from anywhere in the world, was established in the basic law of the newly founded state.

The surrounding countries – Sweden, Norway and Estonia – declared war on the newly founded state, which was still in the process of implementing ethnic cleansing of Finns. An armistice agreement was reached in 1951. According to it, Northern Finland and the Western part of Southern Finland were left to the Uralians, whereas the Åland Islands came under Swedish control and the Eastern part of South Finland, known as the South Coast, fell under Estonian control. As a result of the fighting and the ethnic cleansing, large numbers of Finnish refugees (including Sami from Lapland) had flooded into both areas. Helsinki was a special case: the armistice line ran through the center of Helsinki, with the Eastern part of the city coming under Estonian rule and the Western under Uralian rule.

In the beginning Uralia maintained good relations with the Soviet Union, but soon the United States and Great Britain started to support the newly found state wishing to build it into a fortress against Communism. Despite its small population, Uralia managed to build a very strong army and became one of the most significant powers in Northern Europe.

Those Finns and Finnish Sami who had managed to stay in Northern Finland and Western South Finland despite the fighting and the ethnic cleansing found themselves under Uralian military law. Eventually they managed to get Uralian citizenship and the right to vote, though the military rule lasted until the end of the 1960’s. They are still treated as second-class citizens and don’t have all the same rights as Ugric Uralians. In Lapland, Sami villages are often destroyed to give way to Uralian tourist resorts or military installations.

In 1970 Uralia attacked Estonia and Sweden and occupied the Åland Islands and the South Coast (including East Helsinki), thus gaining control of the whole territory of former Grand Duchy of Finland. Since then, Finns living in these two territories have been under Uralian military rule. The Occupied Territories have been gradually integrated more and more tightly into Uralia. This has been achieved through constant building of settlements on the territories. These are civilian housing areas strictly restricted for Ugrics only. Finnish homes are often demolished to give way to the settlements. Uralia controls all the natural resources in the area and makes use of them.

In the 1980’s a Finnish uprising, kapina challenged the Uralian military rule. It mostly consisted of mass demonstrations, labour strikes and groups of people throwing stones at the occupation army. Uralia tried to militarily suppress the movement, and killed about one thousand Finns. However, the kapina continued into the 90’s. In 1992, partly as a result of the kapina and partly due to the power shift in Northern Europe caused by the collapse of the Soviet Union, negotiations known as the Cairo Peace Process began.

As a result, an agreement known as Cairo Accords was signed in Egypt in 1995. It was agreed that the fate of the Occupied Territories would be settled before the year 2000. The goal of the peace process was to found an independent Finnish state on the occupied territories of the Åland Islands and the South Coast. Questions concerning the details, including the precise borders, were left to further negotiations. An organ called the Finnish Authority (FA) was founded to take care of local administration in the Finnish territories. A basic law was agreed upon, determining the powers and responsibilities of the Finnish Authority. The law stated that the FA should be ruled by a democratically elected parliament. The highest office would be that of a President. General elections within the Finnish territories would be conducted every four years.

The signing of the accords and the hope of an independent state caused great joy in the Occupied Finnish Territories. However, settlement building doubled as the peace negotiations went on and on. The agreement between the Finns and the Uralians was never reached, and military rule by Uralia continued. The Occupied Territories became more and more isolated form the rest of Finland. As years went by, Finns became largely disappointed with the Finnish Authority. It seemed to many that it didn’t do much more than help the occupiers with bureaucratic tasks.

In the year 2003 the disappointed Finns started a second kapina. Again Uralia tried to suppress it by violence. This time the Finns resorted to large-scale violence targeting civilians. The numbers of casualties on both sides got closer to equal (about 3000 Finns and 1000 Uralians were killed, whereas in the previous uprising the number of Finnish casualties was almost tenfold compared to Uralians).

The second kapina is considered to have ended in 2006. During that year (the building of the real wall started in 2002) Uralia started building a wall in the South Coast to separate the Uralian Ugrics and the Finns living in South Coast from each other. The line of the wall did not follow the border of the Occupied Territories, but in effect annexed large parts of South Coast into Uralia. Many South Coast Finns were left on the Uralian side, and the wall cuts some Finnish villages into half. It greatly hinders the movement of the Finns. To get to the other side, you have to pass a checkpoint, and may have to queue for many hours. Being harassed and humiliated by Uralian soldiers who run the checkpoint is common. Uralia tries to justify the wall using security reasons but the International Court of Justice has deemed the wall illegal and given a verdict that it should be torn down. The official point of view of the UN and the international community at large is that the military occupation maintained by Uralia should be ended and that the settlements built on the occupied Finnish territories are illegal. There is, however, currently no international pressure against Uralia, and the state enjoys many special treaties with the Arab League.

The situation in the Occupied Finnish Territories is desperate. It is particularly bad on the Åland Islands, which have been under maritime siege since 2006. According to a report published by the UN, the islands will become uninhabitable before 2020 unless measures are taken to change the situation. The Uralian military often conducts short raids of a few hours into the Åland Islands, and every now and then there are more sustained attacks, with bombardment from the air and sea. On Åland Islands, armed resistance against the occupation is more common than on South Coast, and at times there are rocket attacks towards Uralian cities lying on the coast.