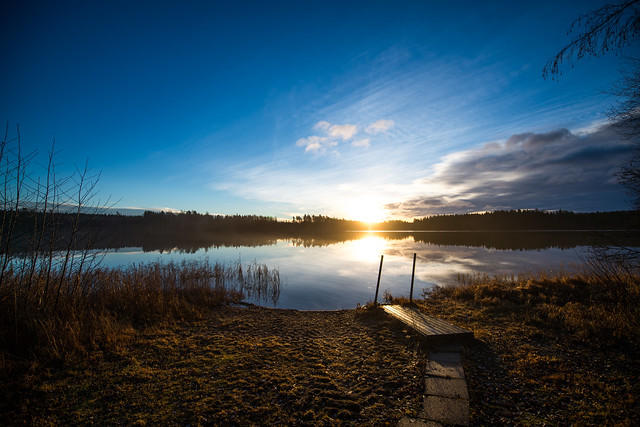 The Ugric religion is shamanistic, and the Ugrics worship nature and animals. The Bear is seen as the most important one of these. Religious Ugrics avoid the word ”bear” in their speech. Instead, they use various different nicknames, including Otso, Tapio, Kontio, Kouvo and the King of the Forest.

Many places on the holy land, such as Björneborg, Kouvola, Tapiola and others are believed by many Ugrics to have originally been named after one of the words used for bear.

According to oral tradition, the Bear is the ancestor of the Ugric tribe. In the form of the god Tapio, the Bear had four daughters with his wife Mielikki. The Ugric people are the descendants of these daughters. Nowadays, this is usually seen as a symbolic story depicting the deep connection between the Ugrics, the Bear and the holy land.

The Shamans and the Hiisi

The shamans are the religious leaders of the Ugrics. They sing songs about the Bear and the ancient heroes. They name babies, teach children, act as ritual leaders, wed couples and cremate the dead. It is believed that they have the power to travel in the spiritual world, to contact the souls of animals and to go to the lands of the dead. Around their neck, the shamans carry a talisman made out of a tooth of a bear.

Hiisi is like a church for the Bear. Inside them, rituals are conducted. In ancient times, the hiisi were holy groves, but during the years Ugrics living in cities have established hiisi inside cellars, backrooms, and tents. Later, separate big buildings were built to act as hiisi.

In the hiisi, children are named and couples wed into marriage. Funerals, however, are not held in the hiisi but in a different place called the kalmi. In the countryside, the bodies of the deceased are lifted on a pyre that is set to fire by a shaman or a close relative (in cities, the bodies are burned in a crematorium). In the kalmi, women cry and men sing. The three souls of the deceased – loyl, itse and halti – find their way out of the body, change into birds and fly to the Bear. When the pyre has burned down, a hole is dug on the ground, and ashes and other remains are put there. Then, a heap of stones is built on top of it. After that, dark bread is eaten, and a strong spirit made of potatoes is drunk.

The most important Ugric ritual is the Coming of Age – Peiain. In this ritual, a young girl or a boy becomes an adult from the viewpoint of religion. Usually children go through this ritual around the age of fourteen.

In the Peiain, the young Ugric girl takes the part of Mielikki and the boy the part of Tapio. Their heads are decorated by flowers, and the boy symbolically kills the Bear. He then takes the sking of the Bear and becomes the Bear. After this, the boy and the girl are symbolically married and eat the heart of the Bear together. After conducting the ritual, they are full members of the religious community.

Religious extremists sometimes use a real, recently killed bear at the Peiain, but nowadays the role of the Bear is usually played by a shaman dressed in a bearskin. The heart of the bear is often replaced by the heart of a horse or elk, and it is cooked in a special fashion. Sometimes cakes made into the form of a heart are eaten instead of a real heart.

The soul of a Ugric who is killed violently may stay on the earth as a ghost looking for consolidation or revenge.

The Ugrics have three souls, halti, loyl and itse. Sometimes the halti soul can protect a person by manifesting as his dobbelganger. After the death of a Ugric, his halti soul may come back on earth to protect his family or friends.

It is said that the Ugric shamans know how to cast spells – to sing their enemies to sink into marshlands, and to change themselves into bears or birds.

The Ugric folklore has always been transmitted through singing songs, not reading books. The Ugrics do not have holy books, and their religion is based on an oral tradition. Religions based on books – such as Christianity – are seen as ”dead religions” and thus despised.