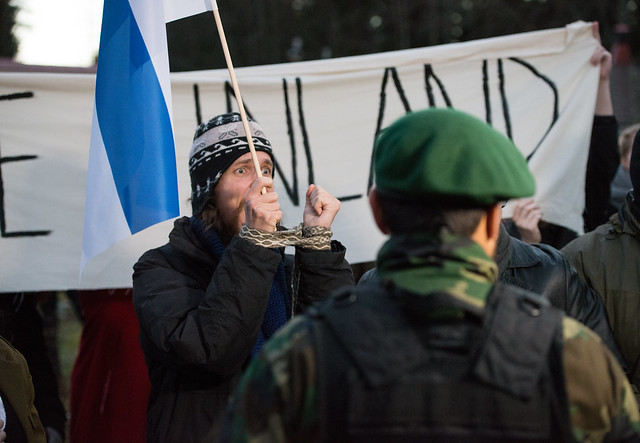 The rule of thumb for the game is that Finnish culture on the Occupied Finnish Territory of the South Coast is pretty much the same as it is in reality. Although a fundamentalist Christian regime controls the Åland Islands under the rule of the Party of Christ, people on the South Coast are generally fairly secular. Most of them belong to the Lutheran church, but that doesn’t necessarily mean that they practice religion in their daily lives. There are some Christian fundamentalists, but mostly they tend to keep to their own social groups.

Nevertheless, their ideas have affected the society, and in some respects the occupied Finland is more conservative than the one we know. Homosexuality is loudly condemned by the fundamentalists, and the general attitude toward it is a bit like in the real world 1980’s Finland. Openly gay people are not unheard of, and the LGBT association Seta is there to advance their cause. However, many people prefer to stay in the closet, and there are no openly gay politicians. Most people are homophobic, and it’s quite normal to tell offensive jokes about gay people, even ones that refer to violence against them. Assaults on queer people are common, and though illegal, they are not taken seriously by the police. However, in university circles, people tend to be more liberal and progressive than in the society in general.

On South Coast, gender equality is approximately on the same level as in real world Finland. There are many prominent female politicians in all parties, and women are even allowed into armed resistance groups. It is socially acceptable for unmarried heterosexual couples to live together, although the fundamentalists sneer at people who do so. On Åland Islands, the social norms are generally stricter than on South Coast.

Some things are different, however. The Finnish territories are a captive economy. Uralia controls all movement of resources, people and goods. As a result, the Finnish market is very unattractive to investors and the economic situation is bad. In big population centres like the Helsinki area, the greatest employers are the Finnish Authority government and various NGOs. Unemployment figures are high – 20% of the work force on South Coast and 47% on the Åland Islands. Of youth under 30 years, 43% are unemployed. However, the South Coast numbers include some Finns who are illegally employed in Uralia (i.e. they have no work permits from the Uralian officials but work there nevertheless). On the South Coast, 38% of the inhabitants live under the poverty line, and on the Åland Islands the number is as high as 73%. Everybody has friends and relatives who are unemployed. Alcohol consumption is high, and alcoholism is a major problem in the Occupied Territories.

Finnish business success stories well known to us in the real world either never happened or didn’t make it big. Nokia is still selling rubber boots. It is doing poorly as Uralian made boots cost less, even on the South Coast. Fazer was taken over by Uralians in 1950, and its products are now known around the world as delicious Uralian chocolate. The Arabia tableware factory exists but they are constantly struggling. Marimekko was never founded. There is no Rovio or Supercell; Angry Birds was invented by a small company in Jordan. The South Coast forests are controlled by Uralia and closed for Finnish industrial use, so there is no Finnish paper industry. On the other hand, Uralian paper industry is thriving.

The economic situation has also affected universities. Although the University of Helsinki historically had abundant resources, most of these were lost to the Ugrics in the catastrophe of 1950. Some of the original university buildings were destroyed. As teachers and researchers fled, all activity at the university ceased. Later, the university was founded anew, but it is not the wealthy and thriving institution that we know. It is constantly short of money and its funding depends largely on development aid and foreign donors.

A Society of Prisoners

About 20% of the Finnish population has spent at least a week in prison at some point in their lives. Shorter arrests are also common. Everyone has friends and relatives who have either been to prison or are currently in prison. In prison, torture is routine. In the Occupied Finnish Territories it is well known that people who serve prison terms sometimes become collaborators. Thus, former inmates at times face suspicion from their fellow Finns after returning to society. This is something of a taboo subject in Finland, and such things are rarely said out loud about prisoners. Prisoners are seen as suffering for the whole of the Finnish people, and in public they are often respected and idealised.

Some cultural symbols also have a different meaning from the one we are used to. Uralians have tried to uproot Finnish culture and to replace it by their own. They have appropriated many things and branded them as genuinely Uralian. According to them, sauna is a traditional Uralian custom, salmiakki is Uralian candy and mämmi is a traditional Uralian food eaten at the Rites of Spring (note that most Uralians have lived on the area less than 50 years).

Many Uralians say that there is no such people as the “Finns”. To them, Finnish language is just a strange dialect of Estonian, and they refer to the Finns just as Nordics. Thus, clinging to one’s roots and one’s cultural history has become very politicized, an act of resistance. For instance, traditional Finnish folk dance (see here, there is first a very slow dance, but it will change into a faster – and perhaps more interesting – one around 2:40) is a cool and popular (and political!) hobby among university students.

Many South Coast and Åland Finns have their roots in areas that are now inside Uralia. Maybe their families fled from e.g. Kainuu or Pohjanmaa during the civil war of 1950 (see history). Often these people see those areas as their true home, even if they’ve never actually been there. At the University of Helsinki, the osakunta (nation), associations for students coming from the same region are central to student life. Many of the regions in question are now in fact part of Uralia, and it is an act of resistance to be part of their associations.

Inkle bands (pirtanauhat) (see here and here) have also become a symbol of nationalism and resistance, and they are often worn also by foreigners who want to show their support and solidarity for the Finns. Even some things outside the Finnish cultural sphere have a different significance than in the real world. For instance, the late British author J.R.R. Tolkien was a great admirer of Finnish culture and a vocal supporter of the Finnish cause. As a result, Tolkien is a controversial figure in Uralia and carries special nationalistic significance for the Finns. At the University of Helsinki, there is a department of Tolkien Studies at the faculty of humanities.

Since the game history is different from the real one, much of Finnish literature is also completely different. Väinö Linna never wrote Tuntematon sotilas (The Unknown Soldier). Hannu Salama is known for his realistic prose depicting life under occupation. He served in a Uralian prison and later used his experiences as material for fiction, after emigrating to Italy. Some of the more fantastic works are the same, however. For instance, Mika Waltari’s historical novels and most novels by Leena Krohn exist in the game world. Tove Jansson emigrated to Sweden and wrote her famous Moomin books there. Some scholars read them as expressions of nostalgia for the lost homeland. If you wish to bring Finnish books to read in character during the game, use your own judgment.

The same thing holds for film, too. Aki Kaurismäki is known for his depictions of life under occupation and for his peculiar style, including dark and absurd humour. Pirjo Honkasalo has directed moving documentaries on settler violence and on suppression of nonviolent protests by the Uralian army.

Finnish popular music is pretty much as it is. Heavy metal is a big thing (but not the only thing by any means). Most metal bands have nationalist songs and resistance songs on their albums. Finland does not participate in the Eurovision song contest since it is not an independent country and not a member of EBU (Uralia is, however, and the contest is very popular among Uralians). The 2006 Eurovision victory of the Estonian band Lordi was a big thing for the Finns, since the lead singer has roots in Finland – his parents are refugees. If you wish to bring Finnish music to listen to in character during the game, use your own judgment.