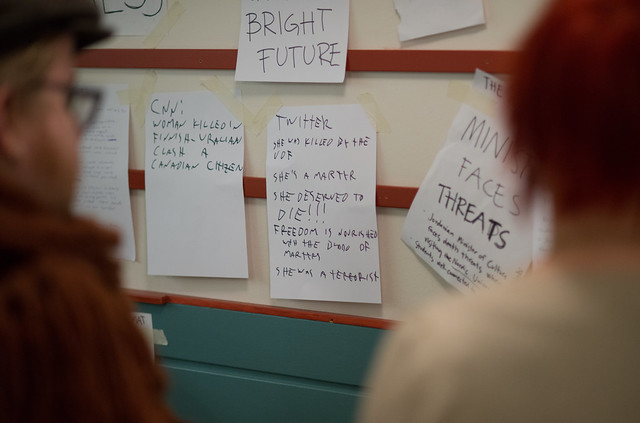 A selection of comments from the supporters of Uralia on various forums on the net.

“Why do you keep talking about ‘Finns’? They are the Nordics of the Land of Uralia!”

“If you want your own country, you can go to Sweden!”

“There has never been an independent state called Finland on the area.”

“There are no ‘Finns’. They are Swedes and Estonians. There is in fact no such language as ‘Finnish’. All of them speak either Swedish or a strange dialect of Estonian.”

“The Nordics living on the area came from Sweden and Estonia while the territories where controlled by those countries between 1950-1970.”

“Central Europeans don’t understand what it is to live in the Northern Europe. They should leave us to settle our disputes ourselves and stop meddling with our affairs.”

“UN and the NGOs are not neutral sources of information. They employ Nordics, you see.”

“You keep complaining about the things that Uralian soldiers do, but you should understand they are not police officers on a police operation. In war, bad things happen. No other army in the world would deal with the Nordics as ethically as the UDF.”

“Why is the international community always looking at Uralia for solutions? What are the Nordic countries doing about the Finnish refugees? Why are they not helping them? Why don’t they give them citizenship?”

“Why are the Finns still in refugee camps? Why don’t they immigrate to Southern Europe or Egypt? They are still in camps, insisting on a ‘right of return’. For them, it’s not about peace. It’s about honor.”

“You have not been there, so you don’t understand how the Nordics are. They are all alcoholics. They send their zombie kids to approach you and to blow themselves up.”

“Beating the kid might be overreacting, I am the first to admit that. But how about blaming the person who taught the kid to throw stones, not the soldier? BTW, it’s not “just stones”. People get injured by stones. Our soldiers are people too, someone’s sons and daughters, what about THEIR human rights???”

“I feel bad about some Finns being driven out of their homes. But don’t you think they would do exactly the same thing if they were in our shoes?”

“Look, I just want peace. But as long as the Nordics don’t want peace, there is no alternative. We have to protect our country.”

“You don’t understand what it’s like to live in Uralia, surrounded by hostile countries.”

“Human rights violations happen in every Nordic country every day. Why are you targeting Uralia, the only democracy in Northern Europe?”

“People who complain about the new settlements don’t understand the reality. Without the building project, all those Finnish construction workers would be unemployed.”

“Uralia has a high level of education and some of the best universities in the world. The Finns, on the other hand, don’t have any top class universities. “

“Although I don’t agree with most of the things on this site, I have to say that I am ashamed of our army. We are civilized. We should not resort to the same kind of barbarism as the Nordics do.”

“We just want peace. But there is no partner for peace. You cannot negotiate with the Party of Christ.”

“People like you keep complaining about the settlements without understanding the realities. To achieve peace, we need to learn to live together. In manufacturing settlement products together, Uralians and Finns learn the coexistence needed for a future of peace.”