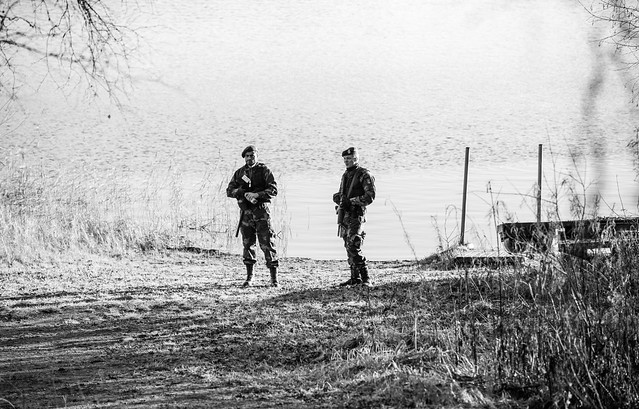 (The history of the Nordic-Uralian Conflict from the Uralian point of view.)

During the period spanning from c.a. 1500 BCE until 1100 CE various Ugric tribes inhabited and ruled the area that now is Uralia (including the South Coast). This is strongly supported by archaeological evidence and historical sources. The tribes spoke proto-Uralic as their common language and were governed by shaman lords in a centralized system of rule. The Ugric folk is mentioned for instance in the book Germania by the Roman historian Tacitus (c.a. 55-120 CE).

Around 1100 CE the Swedish empire conquered the area and Christianity was introduced by force. At this time, thousands of Ugrics were deported and killed. Ugric people were forced to leave their lands, and they were spread around Europe. In the predominantly Christian Europe, Ugrics were persecuted and they had to practice their religion in secret. Nevertheless, the tradition survived, and through the centuries there was a Ugric presence, though small in number, at the most important places of worship in Northern Europe. Although the proto-Uralic language gradually became extinct as a commonly used parlance, it survived as a holy language used for religious purposes.

During and after World War I, Nordic rioters began to attack the Ugrics. The resulting clashes led to the deaths of many Ugrics and some Nordics (the latter mainly killed by the Russian troops that quelled the uprisings). As a consequence, the Russian administration started tightening the rules on Ugric immigration.

In 1920’s an Ugric parliament responsible for Ugric religious, cultural and social affairs was established inside the newly founded Soviet Union. Later, it started taking care of education, health and social welfare in the Ugric community. The land flourished under its rule. Wilderness areas were converted to fields and infrastructure built. The lost language of proto-Uralic was revived and a Uralic press established.

In the 1930’s, anti-Ugric propaganda was circulated among the Nordics. Soon Ugric communities all over the former Grand Duchy were under attack. Massacres took place in areas where Ugrics failed to defend themselves. The most notorious of these is the Tampere massacre where 67 Ugrics were murdered. The Nordic Christian fanatics called for attacks on the “pagans”. Nordic gangs attacked farms, murdered civilians, killed livestock and destroyed crops. As a result, the Ugrics demanded from the Soviet authorities the right to armed guards. This was accepted, and it greatly improved the Ugrics’ ability to defend their settlements.

On the eve of the Second World War, relations between the Ugric community and the Soviet authorities had become tense due to immigration quotas. However, during the war the Ugrics decided to join forces with the Soviet troops against Nazi Germany. Most Nordics, on the other hand, sided up with the Nazis, and Nazi sentiments were common among the Nordics living in the area of the former Grand Duchy.

Despite all this, the Soviet Union continued the policy of immigration quotas after the war. Also the tensions between Nordics and Ugrics became more severe. In 1949 the Soviet Union sought help from the newly founded United Nations to solve the problem. The UN recommended partitioning the area of the former Grand Duchy into two states, one Ugric and one Nordic. The Ugrics were not satisfied with the area allotted to them as it was mostly impossible to cultivate. However, they accepted the compromise. The Nordics, however, rejected the plan, and the leaders of the surrounding Nordic countries declared they would attack the area as soon as the Soviets left.

As the Soviet Union prepared to withdraw, Ugric and local Nordic militias clashed in combat to assume favourable positions before the entry of troops from the surrounding countries. Tens of thousands of local Nordics left the area in anticipation of war. Many of them were nomadic reindeer herders who were not particularly attached to the land.

In 1950, the independence of the Ugric State of Uralia was declared in Turku, which was to become the capital. The next day, Sweden, Estonia, Norway and Denmark sent their armies in a joint operation to invade the new state. In equipment, firepower and number of troops, the Nordics were superior. But they lacked coordination, and the Uralians won the war because of their better morale and tactics.

When the final armistice agreement came to force, the Uralians controlled more land than allotted to them in the UN partition plan. Estonia had occupied the South Coast and Sweden had taken the Åland Islands. Uralia’s neigbours signed armistice agreements but they didn’t recognize the Ugric state’s right to exist. As a result of the war, local Nordics had left as refugees into the neighbouring Nordic countries and into the areas occupied by Sweden and Estonia in the war. These areas were ethnically cleansed of Ugrics.

When the Ugric state was established, Ugrics around the world were given the right to citizenship. The Nordic countries, however, although having a better capability to accommodate people, made no effort to integrate the Nordic refugees from the Grand Duchy. Instead, the people were left in refugee camps to serve as a political tool against Uralia.

Since the independence, Uralia’s relations with its neighbours have been troubled at best, and there have been constant wars and border skirmishes. Most known to the world, however, is the war of 1970, when Sweden and Estonia attacked the Ugric state. As a result of the conflict, Uralia gained control of the previously lost territories of the South Coast and the Åland Islands. This was seen as a great victory by Uralians, as many Ugric places of worship were located in these areas.

The new territories, however, soon became a hotbed for terrorism. The Uralian army destroyed the infrastructure of the terrorist organizations, but they continued to operate from neighbouring countries. The modus operandi of the terrorists included attacks on international targets, and in the 1970’s a considerable number of passenger planes were hijacked by groups connected to the Nordic and “Finnish” terrorist organizations.

In the 1980’s, riots broke out in the South Coast and on the Åland Islands as Nordic youth attacked Uralians, throwing stones and Molotov cocktails. This developed into a large uprising known as the kapina by the Nordics. The Uralian police and military tried to calm down the situation. All in all, there were both Uralian and Nordic victims. Many of the latter were killed by other Nordics due to clashes between different factions or suspicion of collaboration with Uralians.

On American initiative, peace negotiations known as the Cairo Peace Process between the “Finnish” and Uralian leaders started in 1992. An arrangement with a “Finnish” self-government was made for the period during which the two parties were to negotiate a compromise. The “Finnish” leaders representing a terrorist organization called The Social Democratic Liberation Party (SDLP) agreed to recognize Uralia and renounce violence.

However, the negotiations were opposed by other “Finnish” organizations, particularly the Christian fundamentalist ones, and even a faction inside the SDLP tried to hinder them. Although the SDLP leaders had agreed to denounce violence, they failed to prevent a series of terrorist attacks by The Party of Christ and other Christian groups. Nevertheless, a body called the Finnish Authority (FA) was established in the disputed territories to carry out self-government.

The Uralian withdrawal stated in the Cairo Agreements was never fully implemented. One of the reasons was the lack of will or ability of the FA to prevent terror. On the other hand, the “Finns” claimed that the expansion of Ugric settlements on the disputed territories was inconsistent with the agreements. However, the agreements didn’t include any limitations on the settlements, as their status was left to the upcoming final negotiations.

Also, the “Finns” were not willing to make compromises regarding state borders or on the issue of the so called “Right of Return” for “Finnish” refugees. The “Finnish” leaders insisted on a right for all “Finnish” refugees in the world to return to their original homes, most of which were situated not on the South Coast or Åland Islands but inside Uralia proper. Since there are millions of these refugees, it was clear that Uralia did not have the resources to accommodate them. Moreover, the flow of Nordic refugees into Uralia would topple the demographic balance and jeopardize Uralia’s status as a Ugric state.

In 2003, a final attempt for the negotiations was made, but it was interrupted by the breakout of the second kapina, a massive uprising with violent riots. It included massive amounts of suicide bombings in civilian targets within Uralia killing more than 1000 Uralians. As a result, Uralian officials decided to built a wall to separate the disputed territories from Uralia proper, to prevent terror attacks. The project was started in 2006, and it has proven a very successful security measure. After 2007 there have been no suicide bombings.

Uralia still hopes for a peace agreement with the “Finns” through the peace process negotiations, yet it seems very unlikely to be achieved in the near future. The “Finns” seem not to be ready to make the necessary compromises regarding the borders or the issue of the refugees. Moreover, in 2006 there was a violent takeover on the Åland Islands, in which the Party of Christ seized power. This fundamentalist Christian terrorist organization refuses to negotiate with Uralia and insists that the Ugric state must be destroyed. A maritime siege was established to prevent weapons from being smuggled into the islands. Nevertheless, rocket attacks into Uralia from the islands are common, and the Ugric state has been forced to establish costly missile shield systems.

It is also questionable whether the “Finns” are yet ready for independence. The self-government has not gone smoothly. According to the Cairo Agreements, a democratic government was to be established inside the self-governed area. In fact, the “Finnish” leaders have managed to create yet another Nordic dictatorship. Although there were attempts to introduce a parliamentary system, general elections are now prevented by the Party of Christ on the Åland islands, and there have not been elections on the South Coast either since 2006. The FA police commits grave human rights violations and suppresses by force all who criticize it.

Moreover, the territories are doing quite badly economically, and unemployment rates are high. Corruption is common with the administrative officials. Alcohol consumption is extremely high. Alcoholism, depression and other psychological disorders are very common, and there are strong Christian fundamentalist tendencies. All this taken into account, it is highly questionable whether a viable state could be established on the territories.