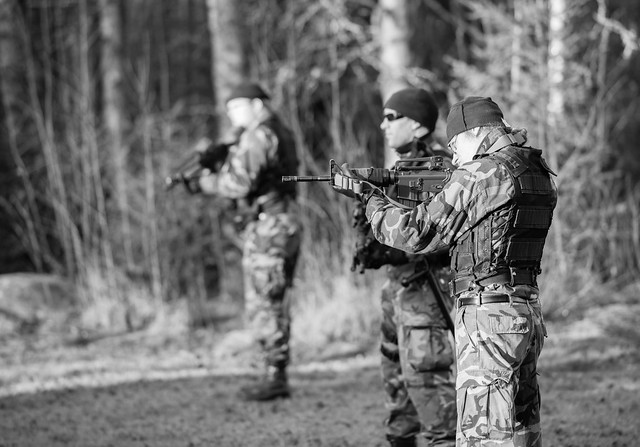 As presented on their own webpages.

Uralia is a small country surrounded by hostile states. In order to survive it has to have a military of extraordinary capability. Fortunately, the UDF is exactly that. Generally regarded as one of the most competent military forces in the world, the UDF ranks highly in training, equipment, motivation, communication and response time. In particular, the military intelligence branch of the UDF is widely considered to be the best in the world.

As a country of 6 million people, Uralia has a compulsory military service for all Ugric citizens, both male and female. The service lasts 2-3 years.

The Force that Rules the Baltic

UDF includes the army, the navy and the air force. Unlike in most armed forces, in the UDF all the branches are unified in a single command structure starting from the bottom. Co-operation and coordination among the different branches are exemplary, and all the specialities share the same ranks and insignia.

The Uralian Navy and the Air Force are the strong striking arms of Uralian military might. On the Baltic Sea the Uralian Navy will suffer no threat to Uralian domination of the waves, and especially around the Gulf of Finland and the Gulf of Bothnia no ships can operate without its permission. Estonia has repeatedly tried attacking Uralia over the water, so these days the UDF reacts almost instantly to any deployment of marine military power by those on the other side of the gulf. The Estonians keep trying to provoke Uralia by deploying battleships outside coastal waters and then complaining when they invariably get sunk by Uralian submarines, planes or missiles. The Submarine Group Orca is considered to be the most elite unit of Uralian Navy.

The air dominance of the UDF is also unquestioned. With U.S.-built fighters and bombers constantly at the ready, Uralia is able to land a surgical strike anywhere on the nearby coastal areas within minutes. The Uralian defense industry builds its own surface-to-surface missiles (particularily the Bargord medium range missile) and maintains the capability to strike targets in Denmark, over 1000 km away.

On land, Uralia has it only slightly more easy. The northern borders with Sweden and Norway need to be patrolled in order to keep Nordic extremists away. Neither of the two countries can police their own northern reaches efficiently, so smugglers, criminals and terrorists keep trying to sneak in. The Snow Ranger Brigade of the north is seen as the most hardcore unit on land. In the south, the Ghost Brigade is a unit known for training in urban and sub-urban warfare as well as its close ties to the military intelligence branch.

Despite its military strength, Uralia is not a country that starts wars – but it is definitely a country that finishes them. It is a source of pride for the UDF to “give more than they get”, ie. make sure that any enemy that strikes against Uralia will regret it. This aggressive stance, which is only logical considering the security situation of the country, is misunderstood by many in the world as warlike and expansionist.

A rough rank and command size chart in the Uralian armed forces, from highest to lowest.

(There are a lot of ranks between those, but they are not relevant for this game.)