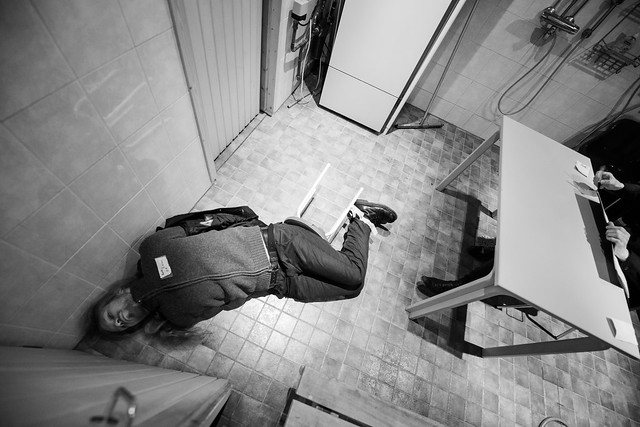 The UN and various NGOs have reported on the following human rights violations and breaches of international law in the Occupied Territories.

Most of the Uralian settlers (see history) are in the occupied territories for cheap housing (and they don’t necessarily even know they are on occupied territory – to them it’s Uralia). In addition to these economical settlers, there are, however, ideological settlers who are usually religious fanatics. They think they have a sacred right to the land and their duty is to move into areas where Finns live and drive them out to reclaim the land for Ugrics.

For example, the ideological settlers beat up pregnant women to cause miscarriage or speed up when they see Finnish schoolchildren cross the road in order to drive over them. They sometimes throw rubbish and sewage on market places and on people’s yards, and they teach their kids to attack Finnish children. Sometimes they come and occupy Finnish homes, doing everything to drive the original inhabitants away.

The Uralian army is technically responsible for keeping the order in the territories. However, the army is there to protect the settlers, and there is not much the soldiers can do to restrain the settlers, even if they would like to. While offences by Finns are handled in military courts according to military regulations, settlers are convicted in civil courts in accordance with Uralian civil law. Many of the soldiers serving in the territories are in good terms with the settlers. A Finn complaining to the soldiers about settler behavior will usually not achieve anything, and in the worst case will be beaten up and arrested. The settlers seldom suffer any legal consequences for their actions.

During the year 2015, about 500 buildings were demolished by the Uralian army in area C of the South Coast (see geography). Often the army comes in the middle of the night, gives the family no more than 15 minutes to leave the house and then bulldozes it, often with some or all of the family’s belongings still inside. If the family resists, they are beaten up or arrested. Often the family ends up living with relatives or in tents provided by the UN or NGOs. A home demolition is a very traumatic experience, especially for children.

The political motive behind home demolitions is to drive Finns away from the area C, to make space for new settlements and thus to make the Finnish residential areas in area C smaller and smaller. The policy is even officially called Ugricization by the Uralian authorities. Under international law, it is illegal for an occupying power to destroy civilian structures on the area occupied unless there is a military necessity.

Finns are often arrested and imprisoned by the army with no reason at all or on dubious evidence, which may be obtained by torture. Sometimes people are detained for months before pressing charges – and sometimes they are released with no charges after those months. Finnish prisoners are often taken to prison in Uralia. It is against international law for an occupied power to keep civilians from the area occupied in prisons within its own state borders.

In the occupied territories, there are two justice systems in use. Finns are under military rule, while the Uralian settlers are under normal Uralian law. The military law allows keeping people detained for long periods without trial, and it allows arresting and sentencing children as young as 12 years.

About 500-700 Finnish children are arrested every year, and arresting children is often used as a means to pressure parents into collaboration. The children are usually arrested between midnight and 5 AM from their homes. They are usually tortured or threatened to press a confession (the confession rate at military courts is 99,7%). The children are then taken to Uralian prisons, where the parents don’t usually have a chance to visit them. Technically, it is possible for the parents to get a permit to enter Uralia in order to visit a child in prison, but often the bureaucratic process to get the permit lasts longer than the prison term.

According to Finnish human rights organizations, more than 90% of the Finnish prisoners are at some point tortured in Uralian prisons or elsewhere. According to Uralian human rights organizations, the number is a little bit lower, 85%. Technically, the Uralian military court has outlawed torture but it is permitted in special cases. The rules allow “moderate torture” in order to get confessions from Finns. Often psychological torture, such as prolonged periods of isolation, is used instead of physical torture but its mental consequences are usually more severe than in the case of physical torture.

Random Harassment and Violence by Soldiers

Harassment of the Finns by Uralian soldiers happens at checkpoints and during home searches and arrests. For instance, soldiers searching Finnish homes sometimes humiliate the parents in front of the children. Random beatings are also common. Technically, all of this is against army regulations, but soldiers rarely get consequences for their actions, and being a bit “crazy” with the Nordics is sometimes even encouraged by the officers.

The soldiers serving in the occupied territories are usually very young (18-21 years) and under strong peer pressure. A particularly strong pressure to “prove themselves” is laid on female soldiers and members of ethnic minorities. The testimonies of former soldiers indicate that an important reason for the harassment is boredom. There is not much to do while on duty in the territories, so you end up having a bit of fun by tormenting the Finns living there.

There are about 500 checkpoints inside urban areas in the South Coast. The separation wall runs inside South Coast, de facto annexing large areas into Uralia and sometimes cutting Finnish towns and villages into half. A journey from home to university that would take about 20 minutes without the wall and checkpoints now takes 2 hours, and longer if there is extra hassle. The Uralian settlers move much faster, since there are roads built exclusively for them. Finnish vehicles are not allowed on these roads.

Large areas on the South Coast containing forests have been closed from the Finns. Officially, they are designated as military training grounds or natural reserves. However, only a small percentage of the military areas are actually used for training, and if the settlements need to expand into the nature reserves, they will be re-zoned as habitable areas, for use of the settlements. The thriving Uralian paper industry uses the natural resources of the forests not designated as natural reserves – and here again, creative re-zoning to fit the needs of industry is not unheard of.

The wall, the checkpoints and closed military zones fragment the Occupied Finnish Territories into small pieces. Many children have to cross a checkpoint on their way to school (and are sometimes subjected to humiliating searches or violence there). For many Finns it is impossible to get to a hospital without crossing a checkpoint, and people have died because they didn’t get to medical care quick enough when an ambulance was delayed and searched at a checkpoint. Sometimes pregnant women end up giving birth at the checkpoint while waiting to get through. In some cases this has lead to the death of both mother and infant.

Restrictions on Freedom of Speech

Demonstrations in the Occupied Finnish Territories are not allowed, and even peaceful demonstrations are routinely suppressed. The Uralian army frequently arrests demonstrators and uses teargas, sound bombs and skunk water (a foul-smelling liquid) to disperse demonstrations. Rubber coated steel bullets are often shot at demonstrators, and sometimes live ammunition is used as well. Many demonstrators have been permanently injured or killed. Even those leaders only involved in non-violent resistance are sometimes imprisoned for long periods. In some cases, even notable Finnish cultural personae have been imprisoned for writings or artworks that challenge the occupation. For instance, the famous Finnish author Hannu Salama, who wrote some keen depictions of life under occupation, served a prison term in Uralia before immigrating to Italy.

It is not only the Uralian army that restricts the freedom of opinion in the occupied territories. On the South Coast, the Finnish Authority police has been responsible for beating and sometimes imprisoning people who demonstrate against the FA. In the religious regime established by Party of Christ on Åland Islands criticism of the rulers is not tolerated either. And people who collaborate with the occupation can face ugly and violent deaths.

In addition to many Finnish and some Uralian NGOs working on human rights, many international activists come to the South Coast. The activists go to checkpoints, areas with aggressive settlers and to demonstrations to observe and document what is going on. Then, they report what they have witnessed and post their videos, pictures and stories on the internet.

In most cases, the mere presence of internationals makes the army and the settlers behave in a somewhat more civilized manner. Thus, one of the most important things the activists do is to give protective presence. Sometimes they live together with Finns who are under threat of settler attacks. A typical thing for the activists to do is to walk young children to school.

There are various different international organizations that send activists to the occupied territories. Some of them require them not to participate in activities such as demonstrations, only document and report. Other organizations coordinate together with Finns, and their activists take part in non-violent resistance activities such as demonstrations and rebuilding demolished houses.

Uralia tries not to let international activists in, so they have to pose as tourists on the border. Security checks on Turku International Airport are meticulous and sometimes people are interrogated for hours before entering the country, or when leaving. Those who are found to be activists are detained, sent back home on the next plane and often banned from entering Uralia (and thus the Occupied Finnish Territories) again. Sometimes activists are arrested on the Occupied Territories and then deported. However, internationals are treated on different standards than the Finns, so they rarely experience violence from Uralian officers.

In addition to the international activists, there is also a tiny but loud Uralian radical left that is opposed to the occupation on principle. Many of them either refuse military service despite the prison sentence it means or manage to avoid it using medical reasons and such. They often come to the Occupied Territories to take part in demonstrations. These principled activists are generally seen as fools and traitors in Uralian society. Uralian activists do not face the same risks as the Finns – if arrested, they are typically released within a day or two, and they are rarely beaten by the soldiers, though it is not unheard of. Uralian activists also often face suspicion from the Finns.

In addition to the radical left, there are various different human rights and peace and coexistence groups in Uralia, many of them quite mainstream. Most of them operate on the principle that there is a conflict with two equal sides – the Uralians and the Finns, and if the people only learned to know each other on a personal level, somehow a solution would be found. The groups organize gatherings where Finns and Uralians can meet each other. Some of these initiatives are supported by foreign governments. As the term “occupation” is controversial in Uralia and rarely used, most of these groups avoid using it (or ban discussing politics at all). Many of their members still serve in the army reserves. As many years of these meetings have failed to produce any result, many Finns in the occupied territories think that attending such only serves to make Uralians and foreign governments feel good about the situation, while failing to challenge the occupation.