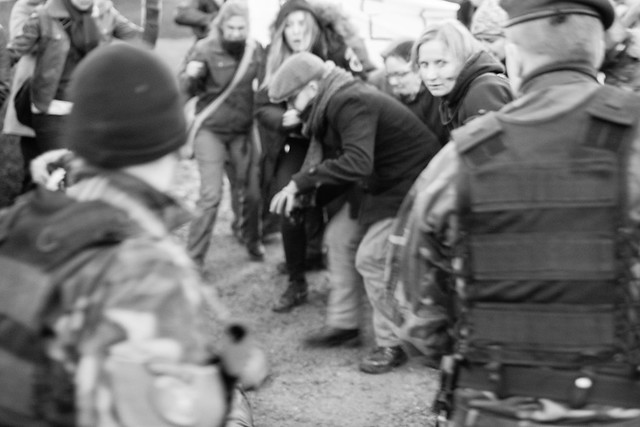 Since 1995, when the Cairo Accords were signed, a never-ending peace process has been going on between Uralia and the Finnish Authority (FA) (see history). The negotiations are currently on hold. The stated goal of the peace process is the so-called two-state solution, where an independent Finnish state would be established on the Occupied Territories of South Coast and the Åland Islands. In the beginning, people were generally hopeful about the peace process, but now most Finns see it as futile exercise, if not downright harmful.

The process seems to be going nowhere and as long as it has lasted, Uralia has continued to take land by building settlements. Future state borders have been discussed over and over again, and it seems that whatever concessions the Finnish Authority makes, the Uralian negotiators are never satisfied with them. For instance, Uralia insists on keeping all the major settlement blocks and an area on the Russian border that would serve as a military buffer zone.

One of the issues in the negotiations has been the right to return for the Finnish refugees. In the ethnic cleansings of 1950, about 750 000 Finns were expelled from their homes in the area that now is Uralia. Some of them ended up living in the South Coast or the Åland Islands, others went abroad. At the moment, there are about 5 million Finns living as refugees abroad. According to the UN declaration of human rights, refugees have the right to return to their original homes, and the FA has been officially insisting on this right. However, as returning would mean moving to areas that are now inside the borders of the state of Uralia, it seems impossible that the Uralian negotiators would agree to this, since they want to keep an Ugric majority in the state. A couple of years ago, WikiLeaks released secret documents indicating that the FA was actually willing to give up the refugees’ right to return in exchange of the establishment of an independent state. This plummeted the support for the FA government on the South Coast.

When the peace process began, jointly coordinated coexistence and peace groups where Finns and Uralians could meet each other became popular. Many Finns trusted that the Uralians participating in these groups genuinely wanted to end the occupation. However, it turned out to be a big disappointment, as most of these people still served in the army reserves and other institutions that maintain the occupation. It seems that in the end, the ongoing occupation was a normal situation for them and that eventually they just wanted the status quo to continue, but everybody to be happy about it.

At the moment participating in such meetings or cooperating with Uralians who don’t genuinely strive to end occupation is largely seen as normalization by even the Finns who believe in nonviolent activism: it is thought that such cooperation only makes the Uralians think of the occupation as something normal, a status quo that can go on forever. An increasing number Finns go so far that they refuse to cooperate even with those few Uralian activists who genuinely work against the occupation. Many see any cooperation with Uralians, regardless of their political views, as normalization. Some even deny the existence of the State of Uralia. They simply don’t recognize it, refuse to use the name “Uralia” and refer to the whole area as Finland.

In the Cairo Accords, a two-state solution was suggested, and it is supported by the UN, Arab League (AL) (see Arab world), EU and most of the international community. The idea also has wide support among the Finns. However, while many Uralians would support an entity called the Finnish state, few would agree to withdraw from all of the settlements, and most would like Uralia to remain in control of the lives of the Finns. In proposals of the Uralian government, large parts of the South Coast would remain under Uralian control, including many of the settlements and all of the borders, coastlines, sea routes and airspace. The Uralians would be willing to grant Finns autonomy to manage their own affairs in a demilitarized entity, whereas Finns want full independence.

There are also many Finns who refuse to recognize the State of Uralia and who wish to see Finland as the whole area of the historical Grand Duchy of Finland. Many families originate from areas that are now inside Uralia. People who came from places like Turku or Oulu (or whose parents or grandparents came from there) see these cities as their homes and insist on their right to go back. Uralia is a colonial project, and there are many who think that in the colonial situation, the only solution is for the colonizers to leave, as the French left Algeria. This idea is, however, often criticized as unrealistic.

Some say that the two-state solution has been long gone. Uralian settlement building has fragmented the South Coast into small pieces, and there is not much left of what was supposed to become the Finnish state. The whole area is controlled by Uralia, and there are people who say it is in effect a one state, an apartheid state. There are some voices for a single democratic state with equal rights for Finns and Uralians alike, with one person, one vote. This kind of solution would resemble ending the apartheid in South Africa, and a way towards it could be a struggle for civil rights for the Finns from Occupied Territories joining together with those Finns who have Uralian citizenship. However, many Finns don’t like the idea of living in the same state with Uralians, and this kind of solution would mean the death for any hopes of an independent state. It would be a strong blow for the nationalistic feelings of the Finns. Many people, both Finns and Uralians, also feel that even if a one-state solution would be desirable in principle, it will never be realized and that aiming for it would jeopardize achieving realistic goals, like the two-state solution.

At the moment, discussions on solutions seem very theoretical to most people. An end for the occupation seems to be far away, and many have lost hope. The peace process has led nowhere. Armed resistance is largely futile, since Uralia is one of the strongest military powers in the world. Nonviolent resistance rarely gets covered by international media. The surrounding Nordic countries have often stated their solidarity, but rarely do anything to help. All the Nordic leaders do is talk. The UN is helpless as the US supports Uralia and vetoes all Security Council resolutions against the Ugric State.

Arab League (AL) diplomats and bureaucrats generally recognize the occupation as illegal, but the AL still continues special trade and cooperation agreements with Uralia. It tries to balance the situation by also maintaining diplomatic ties with the FA government and pouring aid into the Occupied Finnish Territories. However, critical voices say that the development money has not helped to create a viable economy, but a situation of dependency. Some of the money goes into redundant infrastructure, as the AL is unwilling to politically challenge Uralian rule over the Occupied Territories. For example, if movement to a school or a hospital is restricted by the separation wall or checkpoints, the aid money may used to build a new school or hospital on the other side, instead of helping to end these restrictions to movement. According to critics, the development aid money thus only helps to maintain the occupation. Moreover, even AL-funded development projects are often destroyed or hindered by the Uralian army.