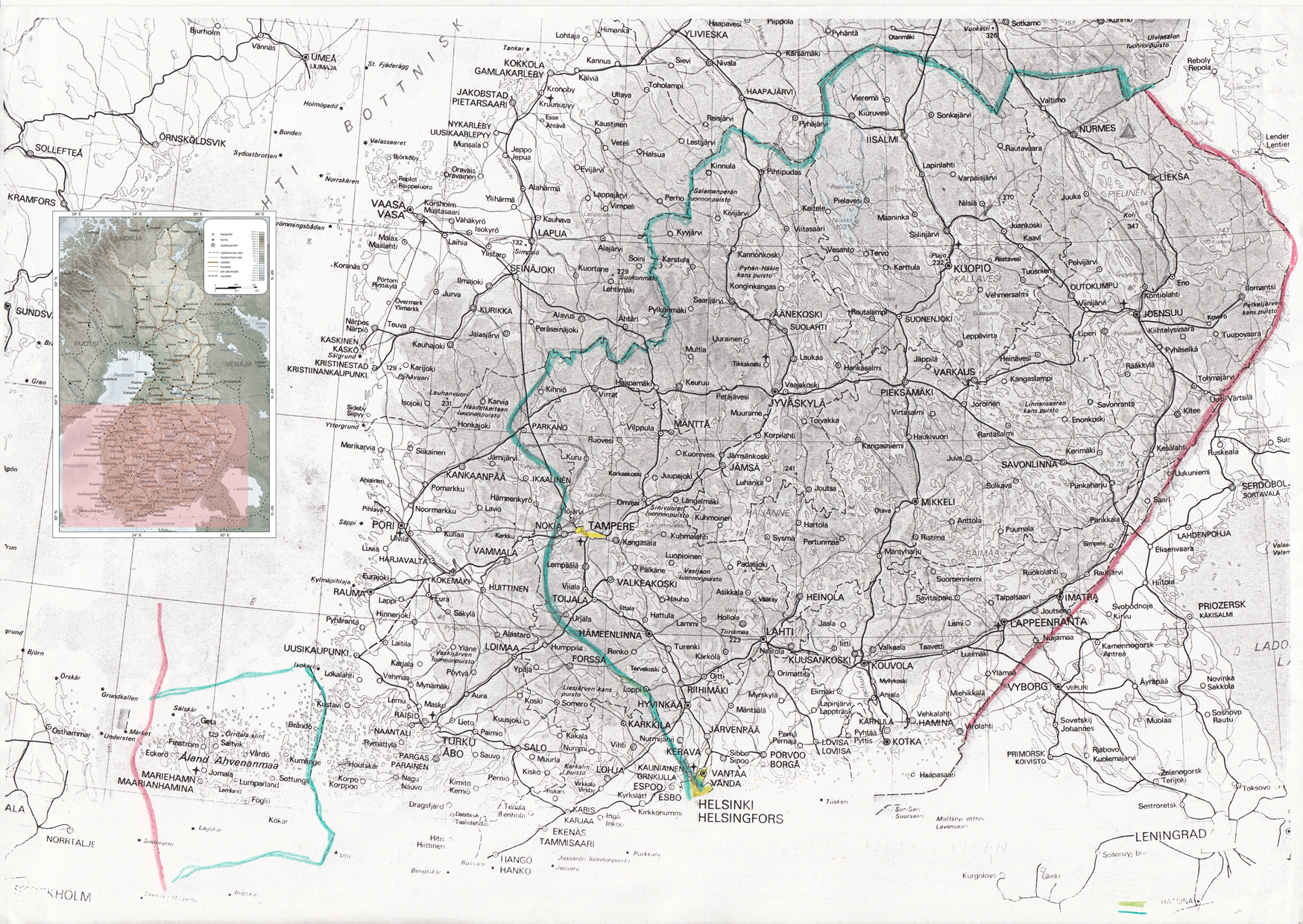 (Click to enlarge. The green line represents the 1950 Armistice border.)

Geography of the Occupied Finnish Territories

Seat of administration: Helsinki
Currency: oran
Languages: Finnish, Swedish
Religion: various forms of Christianity are practiced, but majority of the people are fairly secular (particularly on the South Coast).

The Uralian currency of oran is used as a means of exchange thorough the entire area of the Occupied Territories. One oran is about one euro.

Helsinki serves as the administrative capital for the Occupied Finnish Territories. The Finnish Authority (FA) government offices are located there, as are the delegations of various foreign countries. It also hosts UN premises and offices for various NGOs, both local and international. The University of Helsinki is the most well-known and respected university in the Occupied Territories.

The South Coast is divided into three areas, labeled A, B and C. Area C is under full Uralian control, and takes up about 65% of the South Coast. Area A is supposed to be under full Finnish Authority control (which doesn’t stop Uralian officials and troops from coming in and constantly meddling with affairs), and Area B is supposed to be under joint Uralian and Finnish control. Most of Helsinki is in Area A.

Some of these bisected villages have become famous for their nonviolent demonstrations against the wall. Such is the case of Iittala, where the wall prevents villagers from tending their crops. The weekly protests at Iittala have been going on for more than ten years. The protests have become famous and many international activists take part in them. The Finnish director Pirjo Honkasalo has made a well-received documentary about the Iittala protests.

A journey from home to the university that would take about 20 minutes without the wall and checkpoints now takes 2 hours, or longer if there is extra hassle. The Uralian settlers move much faster, since there are roads built exclusively for them. Finnish vehicles are not allowed on these roads.

On the Russian border, there is a wide buffer zone controlled completely by Uralia. Large areas on the South Coast with forests and lakes are closed from the Finns. Officially, they are designated as military training grounds or nature reserves. The thriving Uralian paper industry uses the natural resources of some of these forests. The South Coast is dotted by Uralian settlements. Most of these are areas where cheap housing is offered for Ugric Uralians. Many lakesides are filled with Uralian summer cottages – it is much cheaper to get one on South Coast than inside Uralia, say, in the Turku archipelago. Finns are not allowed to live in these areas, but they are often used as cheap labour by various industries that operate in the settlements. The settlements provide Uralian entrepreneurs with a means to avoid adhering to the Uralian labour laws, as they don’t hold in the Occupied Territories. In addition to these economical settlers, there are ideological settlers who are usually religious fanatics. They think they have a sacred right to the land and that their duty is to move into areas where Finns live and drive them out to reclaim the land for Ugrics.

Tampere (Tammerfors) is the only Finnish city that has Uralian settlers living inside it. They are religious extremists who claim that ancient hiisi, Ugric holy groves, have been located in the Tampere area. As a result, there is a strong military presence in Tampere to protect the settlers. The city is separated into two administrative areas, T1 and T2. Area T1 is fully controlled by the Uralian army. Area T2 is technically controlled by the Finnish Authority, but the Uralian army constantly operates there nonetheless. The movement of Finns is very restricted on area T1, and they are not allowed to walk on the Hämeenkatu Street (including the central market square) or on the banks of the Tammerkoski River running through the city.

Because of the strong settler and military presence, human rights violations happen constantly in Tampere. The settlers sometimes occupy Finnish homes and they frequently throw stones and rubbish on Finnish courtyards. It is not uncommon for them to attack people. When the situation gets tense, Tampere often sees massive riots by Finnish youngsters. The army quells these by shooting tear gas, rubber coated steel bullets and sometimes live bullets. Because of all this, there is a constant presence of international human rights activists from various organizations in Tampere. The activists mainly provide protective presence (such as walking young children to school) and report on human rights violations.

Since the 2006 clashes, the islands have been under a tight maritime siege by Uralia, and they are now practically an open-air prison. Few people are let out, and even humanitarian aid workers have difficulty getting in. In the war of 1950, large numbers of Finnish refugees poured to the islands. As a result, the Åland Islands that used to be mostly Swedish speaking now have a population of mostly Finnish speaking Finns (especially as many Swedish speakers left for Sweden in the aftermath of the 1970 war).

There are about 1.5 million Finns living on the Åland Islands, and the conditions are crowded and unsanitary. There are shortages of food and clean drinking water, and blackouts are an ongoing problem. Many homes have no proper heating, and this leads to deaths every winter. The Uralian military often conducts short raids of a few hours into the Åland Islands, and every now and then there are more sustained attacks, with bombardment from the air and sea. Finnish fishing boats are routinely attacked by the Uralian navy. According to a report recently published by the UN, the islands will become uninhabitable before 2020 unless measures are taken to change the situation.

The internationally recognized area of Uralia consists the historical Grand Duchy of Finland outside Åland Islands and South Coast (see map). In practice, however, Uralians have stretched the borders by building settlements on South Coast (see history). About 20% of Uralian citizens are Finns whose parents or grandparents managed to stay on the area during the 1950 conflict (see history). They are treated as second-class citizens. The Finns living on the occupied territories (South Coast and Åland Islands) don’t have Uralian citizenship (or the citizenship of any recognized country).